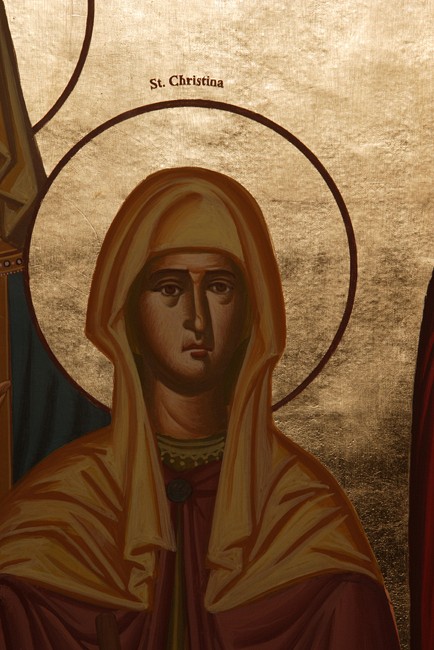 Saint Christina lived during the third century in Tyre, modern-day Lebanon. Her father, governor of Tyre, wanted the exceptionally beautiful girl to be a pagan priestess. He, therefore, placed her at age 11 in a tower with gold and silver idols. St. Christina begged God to reveal Himself and was visited by an angel who revealed Christ to her. St. Christina smashed all the idols and as a result endured many tortures at the hands of her father, including beatings, having her body burned, and having a large stone put around her neck in an attempt to drown her at sea. Each time an angel protected her. In terror, her father imputed this to sorcery and he decided to execute her in the morning. That night he suddenly died. Subsequent governors subjected St. Christina to many more cruel tortures including cutting off her tongue. The martyr took her tongue and threw it in the governor’s face, and he was instantly blinded. Finally, the torturers executed St. Christina with a sword. St. Christina is commemorated on July 24.