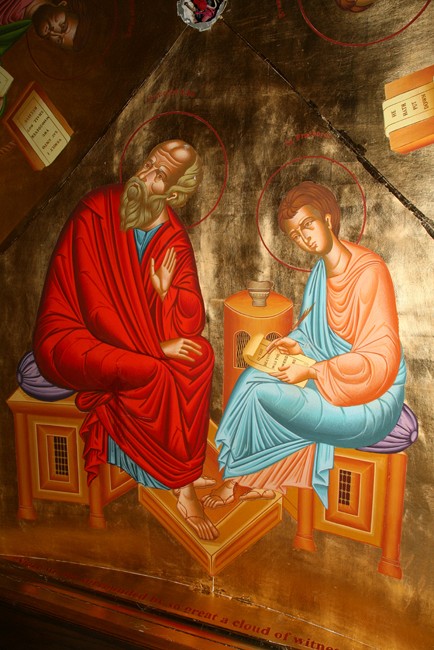 St. John the Theologian, the Divine, or the Evangelist was one of the 12 apostles in first century Palestine. His mother was a daughter of St. Joseph the Betrothed and his brother was the Apostle, St. James the elder. He left his work as a fisherman to follow Christ. He was present at the raising of Jairus’ daughter and witness to the Transfiguration of the Lord on Mount Tabor. It was he, during the Last Supper who laid his head upon Christ’s breast and asked the name of the Savior’s betrayer. Only he, of all the Disciples, followed Christ even to the Cross, where he was entrusted with the care of our Saviour's Mother, as another son to her. Sentenced to death in Rome, the apostle drank a cup of deadly poison but remained alive. He was cast into a vat filled to the brim with boiling oil but was unharmed. He was then exiled to the island of Patmos, where in about 67 A.D. he wrote the Book of Revelation. Returning again to Ephesus, he wrote his Gospel and three Epistles. He lived on earth until 100 A.D. when he was about one hundred years old. St. John is commemorated on September 26.